@Lotterleben pointed out a hackaday project by Karlsruhe students today: Upcycling an old LED dot-matrix display, they outfitted their dorm with a real time bus departure monitor. Of course, there is a German word for that: Dynamische Fahrgastinformationsanzeige, or DFI 🙂

Apart from the cool technical solution the two came up with, this monitor is also interesting from yet another perspective. KVV, Karlsruhe’s integrated transit system, uses EFA by mentzDV for their online journey planner, which is in turn parsed for the display hack. EFA can output XML or JSON (depending on the installation), and the datalove working group used the EFA XML output for their own transit displays at ulm university (see below) – or for your own desktop, or for your smartphone. 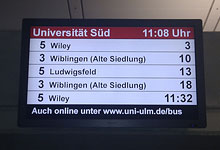 Now, neither the departure monitor, nor the smartphone version, are works of art. They have severe usability and UI issues, and the EFA wrapper, while a cool hack by @taxilof, is tailored towards DING, our integrated transit system. Also, all of the systems completely rely on EFA – thus, whenever EFA fails or has scheduled downtimes, all displays fail.

I would love to bring together all interested parties who have hitherto put some efforts into any wrappers, libraries or solutions for EFA and create a unified and good library for EFA that is interchangeable to whatever version your local authority is running – just insert the API endpoint, choose whether it can output JSON or XML, and be a happy camper. Bonus points for also integrating GTFS as a fallback solution[1]!

The code for the mobile departure site is on Github; Documentation on the EFA interface is collected in the UlmAPI wiki. Interested? Get in touch!

[1] Yes, your transit system most likely does not provide GTFS yet. I am working on this as part of my thesis.

Update: @Natanji and @Feuerrot pointed me towards the projects site of Daniel Friesel, which includes command-line interfaces to – among others – EFA and Deutsche Bahn departure monitors. Front ends are available in the style of Deutsche Bahn and VRR.

Update2: There is another site serving as a entry point into creating your own Deutsche Bahn departure monitors.